Race day at Aragon turned out to be completely unforgiving to Macna riders for Round 14 of the Moto GP World Championship. In Moto 3, Jakub Kornfeil looked set to battle up front after a very strong 4th in qualifying, with Filip Salac starting in 16th after he progressed to Q2 in qualifying, while Marcos Ramirez would start in 19th after just missing out on progressing out of Q1 on the Saturday.

When the lights went out on the start grid chaos reigned as it often does in Moto 3, with riders dicing in every turn for position for the full 19 laps. As the chequered flag came out Kornfeil had fallen back in to the grips of the pack and even though he missed a top 10 finish by just 3 tenths of a second, he would cross the finish line in 15th, no doubt disappointed on how the race had eventuated. 17 year old Salac pushed hard for the full 19 laps, managing to lay down 1min59.189 lap time, the second fastest lap of the race, before crossing the finish line just 3 positions behind Kornfeil in 18th. Marcos Ramirez truly had a weekend to forget, after his disappointing qualifying result that saw him starting from 19th, he found himself in the gravel trap on lap 5 and unable to rejoin the race. With just 5 rounds remaining in the 2019 Moto 3 World Championship, Ramirez holds down 5th overall in the championship standing, trailing 4th by a measly 3 points, while Kornfeil managed to hold on to his 12th place in the championship standing, and the young Salac sitting in 25th place overall. 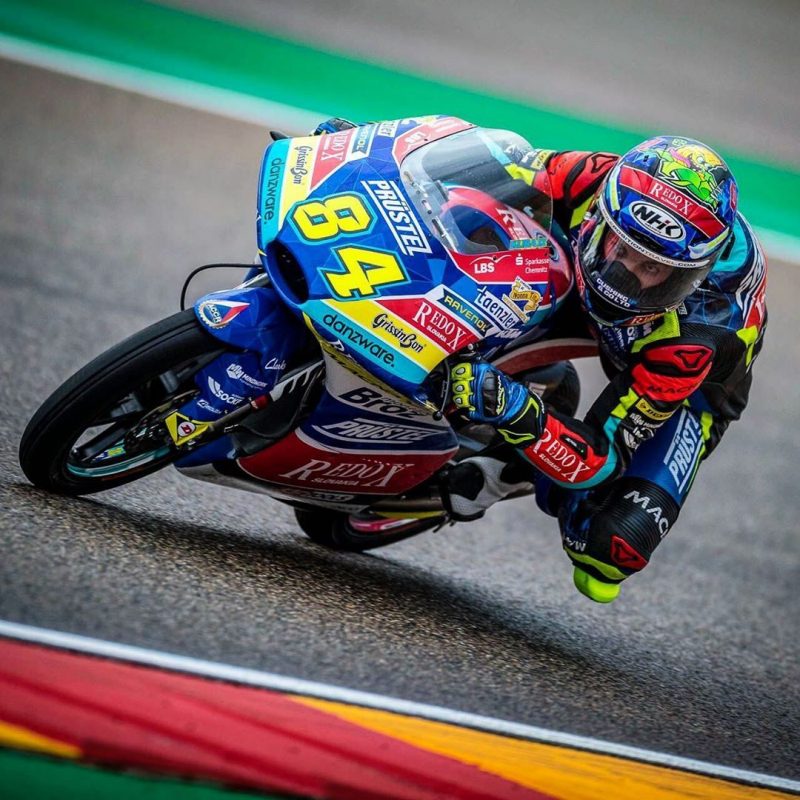 Kornfeil laps in damp conditions during practice at Aragon

Andrea Locatelli and his Kalex didn’t have things any easier in Moto 2, starting from 15th after managing to progress out of Q1 on the Saturday, the talent laden Moto 2 class saw battles throughout the field, with Locatelli battling riders around him before being passed by Bezzecchi and Chantra to cross the finish line in 17th.

Macna riders now look ahead to the fly away rounds, with the Thailand round commencing on the 4th October.