Round 17 of Moto GP is now in the books after Phillip Island delivered a wild weekend of racing. As it is renown for, the Phillip Island weather played havoc all weekend, with rain and cold conditions prominent across the entire weekend, with Saturday’s qualifying being cut short by extremely high winds. Despite the tricky conditions, it was Marcos Ramirez that stole the show in Moto 3. After working hard through the early practice sessions searching for bike setup, when qualifying rolled around on Saturday afternoon, it was Ramirez that would time his run to perfection. On a drying circuit, Ramirez waited until late in the Q2 session to lay down a blisteringly fast lap, which would not be topped and earned Marcos his maiden Moto 3 pole position. Fellow Macna riders Jakub Kornfeil and Filip Salac didn’t have things quite so easy, with neither rider progressing out of Q1. A grid penalty compounded Kornfeil’s troubles as the GP officials had deemed his incident on lap 1 of the previous Japanese Grand Prix worthy of 9 position grid penalty. This would see Salac starting from the 7th row of the grid in 20th, and Kornfeil all the way back in 28th. Kornfeil was particularly disappointed with the result, having struggled with the mixed track conditions, but was focused on a strong finish on Sunday, hoping for either all dry, or all wet conditions for the race. 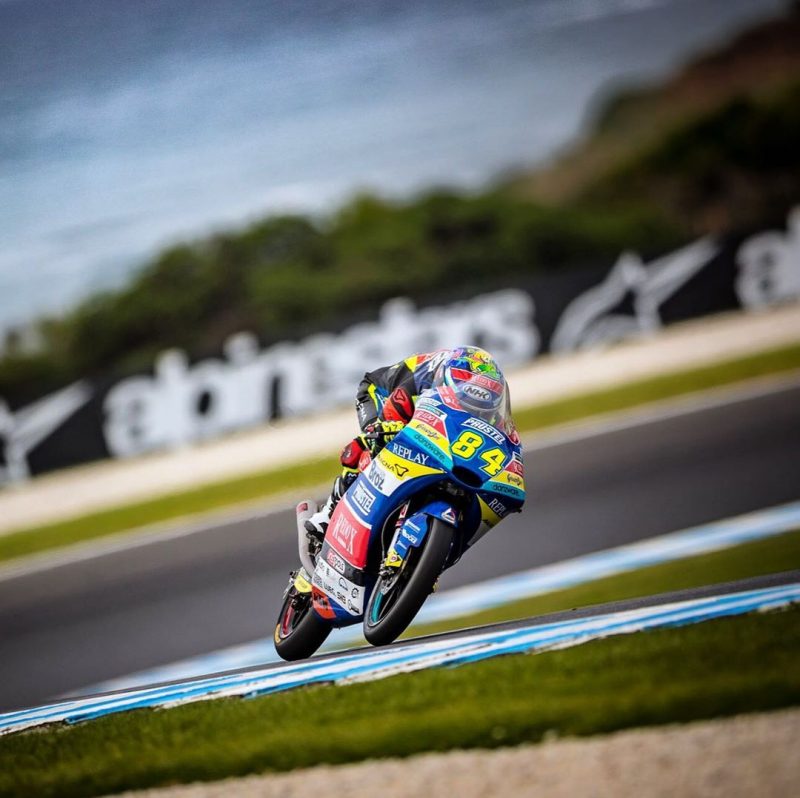 Jakub Kornfeil tucked in and on the gas at Phillip Island for Round 17 of the Moto 3 World Championship.

Cool, overcast conditions greeted riders on Sunday morning for race day, with threatening clouds hovering for most of the day. In the warm up, Ramirez continued his form from Saturday, laying down the second quickest lap of the morning. Salac showed good speed, just outside the top 10, while Kornfeil continued to work on bike setup, determined to put in a strong finish in the afternoon’s race.

The Moto 3 race would kick off the afternoon’s proceedings, and as is typical for the class, riders were battling and scrapping for track position from the very first lap. Ramirez got away well from pole and in the opening laps of the race ran at the front of the big lead group that had formed. The fast, flowing circuit lends itself well to slipstreaming and drafting, which saw constant changes for the lead and riders in the front group swapping positions in almost every turn. Ramirez became a victim of the constant battle for position, trying to stay out of trouble and at the same time conserving his tyres for a late charge, which saw him drop outside of the top 10. Midway through the race it was Salac who had put in a really strong ride to show the outright speed and talent that the young rider has, moving his way inside the top 5 and battling right at the front of the lead group. In the closing laps it was Salac who looked set for the best finish of his short career, before being blatantly taken out by Alonso Lopez who had attempted to carry way too much speed in to turn 4, T-boning Salac and leaving him on the deck. Salac attempted to re-join the race, and after such a strong showing, it would be nothing more than a D.N.F in the results column for the young Czech rider. Meanwhile Jakub Kornfeil had been riding his own race after starting towards the very back of the grid, but after pushing for the entire 23 laps had forced his way inside the points to add to his championship season tally. It was Ramirez though who made waves with his ride in the final laps of the race, after having dropped outside the top 10 by the midway stages of the race, Marcos made some extremely bold passes and forced his way towards the front as other riders fell around him in the closing stages. Sitting in 4th position entering the final turn on the final lap of the race, Ramirez got a great drive on to the straight blasting right past Albert Arenas and Tatsuki Suzuki to cross the finish line in second position, narrowly beaten to the line by fellow Leopard Racing team-mate and now 2019 Moto 3 World Champion Lorenzo Dalla Porta. Another fantastic result for Marcos Ramirez, who still sits firmly in contention to finish 2nd overall in the world championship. 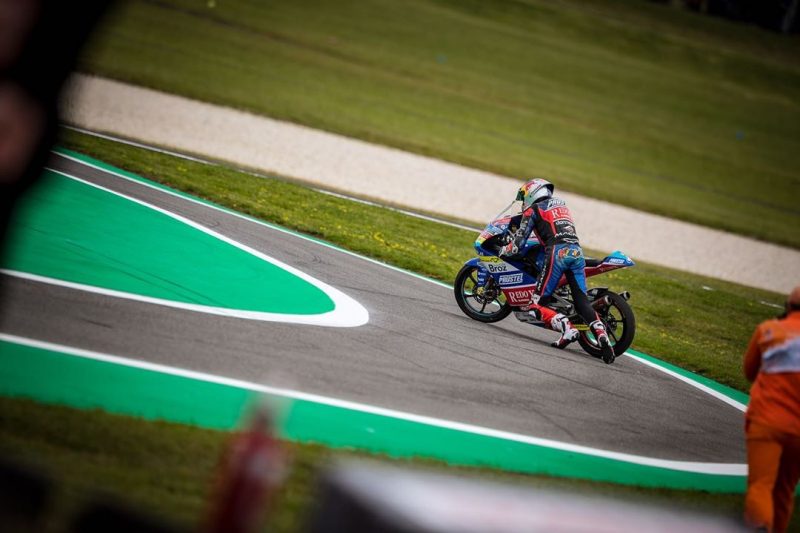 Salac attempts to re-join the race after being taken out whilst sitting in 4th position during the Moto 3 race.

Another short turn around with the last of the fly away rounds commencing in less than a weeks time, the penultimate round of the Moto GP World Championship in Sepang, Malaysia. Ramirez will be aiming to go one better in Malaysia, while both Salac and Kornfeil will be looking for very strong finishes to the year. Should be another great weekend of racing at what is a high speed track with lots of passing opportunities.