After a weekend to forget in Aragon for Marcos Ramirez, he was determined to get his championship back on track with a strong performance in Buriram, Thailand. With changing conditions throughout the weekend with the unpredictable and extreme weather that Thailand is known for, Ramirez and his team went to work chasing bike set up that would have him battling for pole position in qualifying, and pushing for the race win when the lights go out on Sunday. That work well and truly paid off when Ramirez laid down a 1:42.717 in Q2, which would leave him just 1 tenth off pole position, and would see him starting from the middle of the front row. A fantastic result for the young rider.

After the great qualifying position, it was all about race day for Marcos and his team. Ramirez got a great jump from the front row, and would lead laps early, the best place to be with riders bashing in to each other and a few going down further back in the pack. As is customary for the Moto3 pack, riders continued to swap positions at the front of the field for the duration of the race, and in the closing stages of the 22 lap event, Ramirez was well in contention to take the win. After pushing hard on the final lap, Ramirez gave everything he had to try land on the podium, but just fell short, crossing the finish line in fourth position, less than half a second behind the eventual race winner. Ramirez and his Leopard Racing Team were elated with the finishing position and have now cemented fourth position in the championship standings. 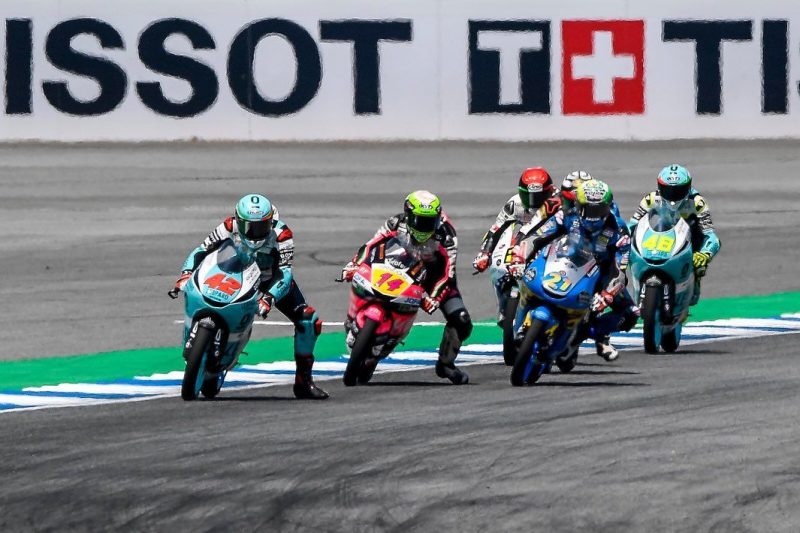 Ramirez leads the field during the Moto 3 race in Buriram, Thailand

Fellow Moto3 Macna racers Filip Salac and Jakub Kornfeil also put in strong showings in Thailand. Both riders maximised their track time with the ever changing and extreme weather conditions, setting some very good times in free practice, and looking to progress in to Q2. Both Salac and Kornfeil managed to progress in to Q2 and put in some very good lap times, but both were hit with grid penalties due to infractions stemming from incidents in free practice. This would see Kornfeil starting from 25th, and Salac starting from the back of the pack. Neither rider was phased at the grid penalties that both had been handed, and were determined to put in strong finishes, with an aim to get through the field and in to point scoring positions. Both Salac and Kornfeil both put in stunning rides, pushing hard for the whole 22 laps, and when the chequered flag dropped, Kornfeil would follow Salac across the finish line, with Kornfeil finishing in 12th, and Salac in 11th. Kornfeil now sits comfortably in 12th overall in the championship standings, while Salac in his rookie year in the championship sits 23rd.

In Moto2, Andrea Locatelli was determined to improve on his result in Aragon from the previous round, and throughout the practice sessions looked to be making good inroads with his bike set up. Come qualifying on Saturday, Locatelli was intent on progressing out of Q1 and in to Q2, and went on to top the time charts in Q1, going fastest with a 1:35.698 lap time. The conclusion of qualifying would see Locatelli starting the race from 15th. After a decent start from the 5th row of the grid, Locatelli battled a number of riders around him for the full 24 laps, pushing forward to cross the finish line 13th, a solid points scoring finish. He now sits in 17th overall in the championship standings, with just 4 rounds remaining in the 2019 World Championship. The Macna racers now look forward to the next round in Motegi, Japan in 2 weeks time.