Round one of the 2019 Australian Superbike Championship (ASBK) didn’t go to plan for the DesmoSport Ducati team. After setting the quickest time in the initial practice session, two crashes and a broken finger on each of Bayliss’s hands ended the race weekend early for the Gold Coast based team.

Setting a qualifying time of 1:32.759 with one broken finger, Bayliss was on-track for a solid performance. A strong start in the first race saw the DesmoSport Ducati Panigale FE leading the field in the early stages, before connecting with back of Wayne Maxwell in turn one, sending Bayliss into the gravel trap and breaking the middle finger on his right hand, ultimately ending the weekend for the team.

Ben Henry: “I’m just glad that Troy’s otherwise ok after two really fast crashes. It’s not a great a way to start the season, but crashes area a part of racing. I can’t thank the entire team enough, and the crew from Cube Racing, for their efforts in rebuilding the Panigale FE after the first race. We had the bike ready for race two, but ultimately it just wasn’t possible for Troy to race safely. It’s really tough to walk away from the first round without any points after the work we’ve all put in, but we’ll head back to the workshop and focus on round two at Wakefield next month.”

Troy Bayliss: “That’s not the way I thought this season would start, that’s for sure. Two crashes at over 200 kph and not a scratch, fingers my fault for breaking as they should have been closed hands ,,,, Macna Riding Gear Australia suit and gloves took the ultimate test and took it well , Agv Helmet again brilliant, TCX Boots Australia as you seen after crash I did more then walk away. Breaking the little finger on my left hand wasn’t ideal, but I was able to ride with it. The team did a great job in rebuilding the bike after the second crash, and when I headed out for race two, I was confident I would be able to race and collect some points, even after confirming that I’d broken the end of my middle finger on my right hand. On the out-lap though, I just couldn’t pull the brake lever properly. I’m really disappointed, but I’m booked for surgery on Tuesday and I’ll be back, ready to ride for round two next month.” 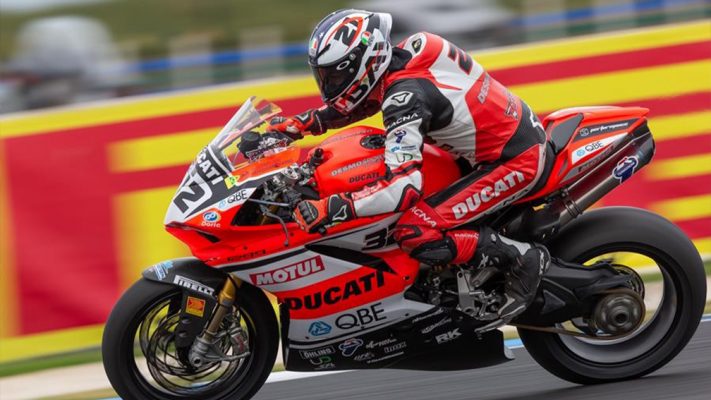 DesmoSport Ducati now head back to their Cube Performance Centre base on the Gold Coast to regroup before testing in March.